Business Insider - I drove a 3-wheeled, one-seater electric car on a mini road trip through Southern California and I'm convinced it could change how we get from A-to-B 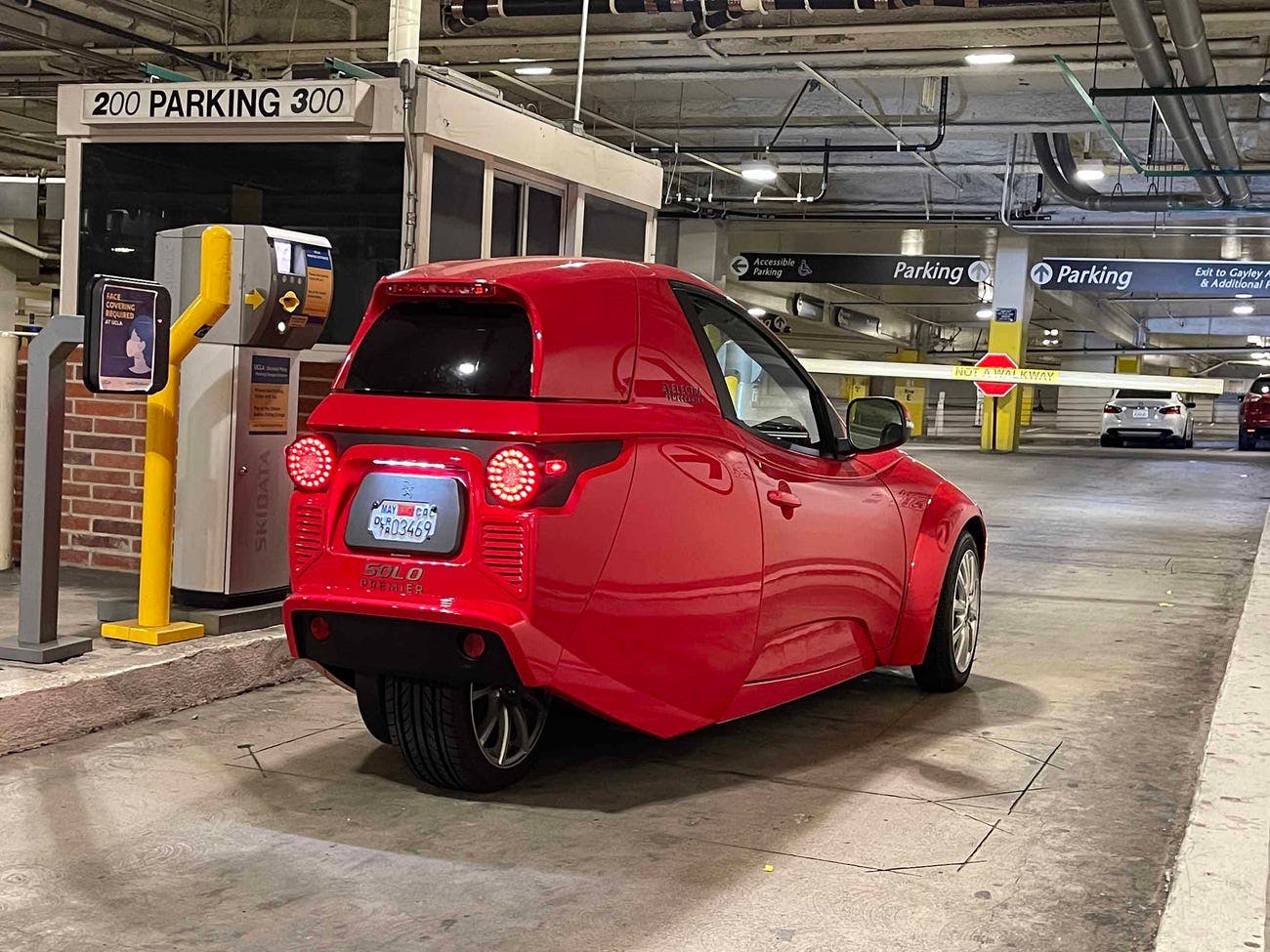 I drove a 3-wheeled, one-seater electric car on a mini road trip through Southern California and I'm

The ElectraMeccanica SOLO EV is an electric car that can travel 100 miles on a full charge.
Yes, it's a one-seater with three wheels, but it has the creature comforts of a full-sized vehicle.
It's a fun-to-drive ride around town, and perfectly capable of longer highway jaunts.

Lately, I've been thinking about choices. In the US, there's no shortage of options when you're shopping for a car. You can find an unlimited inventory of four-door sedans, coupes, wagons, trucks, vans — and an overabundance of crossovers and SUVs and (crossover SUV coupes), supply chain crisis and semiconductor chip shortage notwithstanding.

But I just wonder if it always makes sense to have four wheels and several empty seats when I'm on the road. What about an in-between car for when I just need to run a quick errand, pick up food, or simply drive solo to my destination? And what if that in-between car could be a clean-energy vehicle I could plug into a wall outlet in my garage?

I had a couple weeks in October to think about those questions when I got the keys to a SOLO EV, a three-wheeled, one-seater electric car from ElectraMeccanica.

So, let's get the obvious out of the way: yes, the SOLO EV looks quirky. People often stopped to take pictures of it as it sat in the driveway. One person jokingly asked: "Where's the rest of it?"

But the more I zipped around Los Angeles in it during the warm early days of fall, the more I wanted to drive. The comfortable, well-bolstered seat, air-conditioning, and Bluetooth audio made the SOLO EV feel like my own personal rocket. It quite easily gets you to an 80 mile-per-hour top speed, which I found to be plenty for the highway.

"We've been working to really, truly tune into the personal transportation needs of our customers." That's Kevin Pavlov, the CEO of ElectraMeccanica. He and the company's chief financial officer, Bal Bhullar, sat down with me at an October delivery event where early reservation holders drove away in their own SOLO EVs.

Who really needs a one-seater electric car though? It's a fair question. Pavlov said he's confident there is a sizable market for the SOLO, be it as a fleet vehicle for last-mile deliveries, for college campuses, and beyond. "I think the market's going to keep telling us where the niches go and that provides us the time to continue to make more personalized answers," he said.

We're in the early aughts of an automotive revolution right now. Battery electric vehicles are becoming more popular as automakers introduce new models and governments make plans to phase out internal combustion engines over the next decade. Where you once could count the number of available electric cars on one hand, there are now dozens available, and many more in the pipeline. And they're getting less expensive, too. The SOLO EV can be had for $18,500.

Thankfully, all of the talk about range anxiety in those early days of the electric car is pretty much moot now. Most electric vehicles can travel at least 200 miles on a full charge.

After a few short trips close to home in the SOLO EV, I started to wonder how far I could stretch its 100-mile range. On the surface it sounds paltry, but considering drivers will mostly use this for short commutes and jaunts about town, 100 miles is truly more than enough.

Pavlov summed it up poetically: "Some people will drive 10 miles, some will go 30 miles. Other people want to drive it to work. And some will drive this car to go find themselves."

And that's when I had an idea. I thought about the very first car review I did for Business Insider back in 2015 when I drove what was then the brand-new Volvo XC90 from LA to San Francisco on one tank of gas, and thought I'd try for a long-ish trip in the SOLO EV. Not really to find myself, but to prove that range anxiety is indeed overrated.

So I planned to take the SOLO eastward, from LA to the high desert, a roughly 75-mile, one-way drive.

Status at the start of the trip: 99% charge.

The long and short of it is, this electric three-wheeler proved itself to be a fun, capable and versatile ride. I cruised comfortably to the desert, A/C flowing, music playing, in the glorious solitude of my personal battery-powered coach.

I pulled up to a drive-thru for lunch with about 26 miles of range to spare.

Great news for me since the ChargePoint location I planned to visit was just another three miles away.

Once I arrived, I walked away to enjoy my lunch and visit with family. A little more than two hours later, I returned to find the SOLO EV had regained 90% of its battery charge, more than enough for the 75-mile trip back home.

In a world of automobiles that seem larger and faster than ever, it's nice to slip into something that's anti-all of that. The SOLO EV is large enough (even for my 6-foot-2-inch frame) and quick enough to scoot past gasoline-powered vehicles from a stop, thanks to the instant torque you get from the electric motor.

And perhaps that idea of "just enough" is indeed suitable for this segment of the micromobility space. All the better if it helps preserve our environment.